Hyflux Sale of Tuaspring and the Financial Damages - Part 2

In my previous post, we discussed about the possibility of Hyflux taking a s$600-$750 million impairment for the sale of Tuaspring. The next order of question is to find out the effects of the impairment on vested interests in Hyflux.

Basically Hyflux has 4 vested parties. Should all of Hyflux's assets be sold off (cease to be a going concern), below is the order in which these parties will have a share of the proceeds:

Hence should Hyflux take the $600-750 Million impairment and is able to sell off the rest of its assets and projects at their stated value. Hyflux Ordinary shareholders will get nothing, Perpetual and Preference shareholders are likely to lose close to 70% of their capital; while Bondholders and Secured lenders are likely to walk away unscathed.

What happens if Hyflux takes the Impairment and continues Operating with its other assets?

In my opinion, this scenario has a higher probability to occur. Hyflux will continue its oeprations after selling Tuaspring for a cash proceeds of about $700-850 Million.

However, Hyflux has to first pay off Maybank the $400 million loan it took. This leaves Hyflux with about $300 million - $450 Million cash. Hyflux currently has about $18.6 million in cash reserves in June 2018. With a $100 Million bond it has to pay this year and bank loans due this year, $165 million of bond due next year, it is difficult for Hyflux to repay all its bondholders and continue funding its projects which are burning cash as they are not under construction.

Should Hyflux be unable to sell off its other assets, i expect Hyflux to propose a financial restructuring where bondholders (ii) , and investors of group (iii) and (iv) will have to undertake a conversion to share exercise like what Ezion did.

Ezion is a unique case because bondholders, perpetual shareholders all agreed to a conversion to share deal. However one key difference is that Ezion bond and perpetual holders knew that should Ezion cease as a going concern, they were likely to lose their entire capital. However, in Hyflux's case, bondholders are probably aware they will get a significant amount of capital back if they demand the closing down of Hyflux and liquidation of its assets.

Should Hyflux decide to save itself and fight for a financing restructuring, it mean bondholders have to be offered either more shares per $1 capital or converting Hyflux shares at a lower price than perpetual holders.

As for ordinary shareholders, they have no choice but to be massively diluted. After all, getting even 0.01% of your capital back is better than getting none at all.

In my opinion, it is likely that groups (ii), (iii) and (iv) of the vested parties will be financially impacted should Hyflux attempt to keep itself afloat by restructuring.

However, should Hyflux be forced to closed down, it is likely group (iii) and (iv) will be impacted the most, while group (ii) are likely to get their bond principal back- minimal financial damage to them.

The whole Hyflux restructuring will be decided on the outcome of Hyflux Bondholders vote, will they vote for (a) converting to shares in an ailing company or (b) will they try to preserve their capital; which as a result will cause massive financial damage to perpetual, preference and ordinary shareholders (mom and pop investors).
Posted by Choon Yuan at 07:51 No comments:

Hyflux Sale of Tuaspring and the Financial Damages - Part 1

To inform investors on its financial restructuring, Hyflux held two townhall sessions on 19 and 20 July 2018. One of interesting fact is the presentation on the book value of their projects, reproduced below. The link to their slides can be found here. 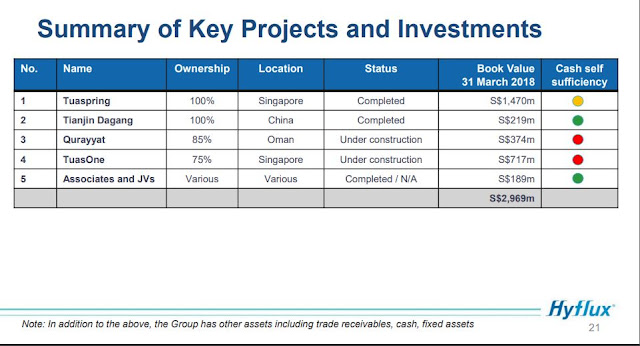 The Elephant in the Room - Tuaspring Project

Hyflux's financial restructuring revolves around the sale of Tuaspring. The sale value of this project will determine how much losses investors will take. During the court hearing in June 2018, Hyflux's lawyers said they are hoping to close a deal of no less than s$1.3 billion in book value if time is on their side. Tuaspring is owned by Hyflux until 2038, after which it is no longer owned by Hyflux.

In my opinion, it is difficult, if not impossible, for Hyflux to fetch a $1.3-1.4 Billion Price Tag based on the following fact-findings:

Singapore has an overcapacity of power generation plants. Quoting from the business times, the Singapore Power Generation Sector has a total capacity of 13,350 MW, while in 2017, Singapore only consumed 7,000 MW. Even with an annual growth of 3%, Singapore's power consumption will only grow until 13,000 MW in 2038 (which is the last year Hyflux owns Tuaspring). So until then we are likely to face oversupply.

Hyflux had built Tuaspring in 2012/2013 when Singapore did not have an overcapacity problem. Because Hyflux and other companies started building power plants at the same time, this resulted in the supply glut. It resulted in Singapore electrical prices falling by half. This is similar to what happened in the oil rig glut situation Keppel and Sembmarine faces now.

In the latest FY 2017 results, Tuaspring made s$80 Million in losses for the full year, while in Q1FY2018, it already made losses of s$23 million for only 3 months. To explain, every loss a company makes, it has to record the same fall in numbers in the book value. For example, Hyflux book value of Tuaspring is $1,470 million. If it makes s$80 million of losses in 2018, Hyflux has to record s$80 million in decrease of book value. It results in Tuaspring having a new book value of $1,390 million.

AQ of Valubuddies [Link found here] highlighted an interesting fact and that is the LNG contract Generation companies have here. The price and volume of Genecos with LNG have been fixed until 2020 or even till early 2020s. This means Genecos like Hyflux have to continue to honor the agreed LNG prices and volume despite the depressed electricity prices. Hyflux is likely to continue bleeding $80 million a year assuming a 4 years period until it is able to renegotiate and get a new LNG contract.

The $1,470 million book value of Tuaspring is based on Hyflux's projection of the amount of benefit it will derive until 2038. Given the depressed electrical prices and prolong overcapacity in Singapore, potential investors will be questioning on the validity of Hyflux's inputs towards its valuation model. This is an area of contention.

With the Tuaspring likely to bleed a total of s$320 million for the next few years, bidding companies want to have a positive return for investing into a water/power plant that is in an oversupplied power industry; I would expect offers of about $700-$850 million in book value.

My own estimate is that Hyflux may have to take a write down or losses close to s$600-$750 million with the Tuaspring sale.

In my next post, I will cover how a s$600-$750 million impairment affects the 4 different type of parties involved with Hyflux - i) Secured Bank Lenders, ii) Note Holders, iii) Perpetual and Preference Shareholders and iv) Ordinary Shareholders. [Link to Part 2]
Posted by Choon Yuan at 12:57 1 comment:

There is one SGX company which has constantly baffled me and that is an S-Chip Sino Grandness.

Basically SFIG is a food and beverage company. Its main product is the selling of a canned beverage product line called "Garden Fresh" which claims to be distributed and consumed by consumers in China and Hong Kong. SFIG is a very "profitable" company churning about 7.5 Singapore cents per share in earnings. This means SFIG is now trading at about 2.8x PE. By all valuation metrics of finance textbooks, SFIG is a value gem because it trades at a P/E of 2.8, Price book of 0.3 times and from its operations it generates a cashflow annually at the rate of its current market capitalization.

It makes it one of the most (if not THE most) undervalued Gem in SGX. Going by my own valuation metrics, the company is worth in the region of 70 cents, an upside of 341% returns from its current price of 20.5 cents.

Its full year results can be read here: Link

There are two aspects which intrigues me: its beverage business (which makes up 70% of its business) and the extension of debt it had with lenders) 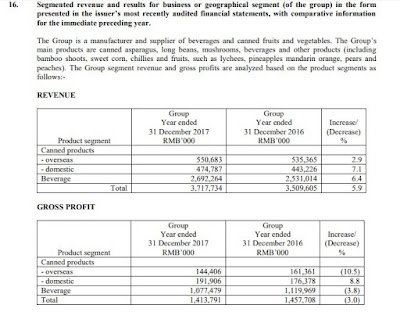 It got me thinking about the average price of a Minute Maid Can Drink (a fruit Juice product distributed by the Coca Cola Company in China) that retails about 2 yuan in china. This means Garden Fresh is likely to be selling close to 1 billion units of Garden Fresh product in Guangzhou and the few China Provinces where it claims its business is situated in. Given that Garden Fresh is making so much profits (RMB 1 billion), it should have been well known among its competitors or even among investment funds who will be eager to snap it up to gain exposure into China.

The recent debt extension of its RMB 20 million is another interesting fact. The interest rates is going at a rate of 15% per annum. Given that the company has a reported cash & equivalent of RMB 923 million, shouldn't it use its funds to retire the bonds? After all, its beverage business is no longer growing at a rate of 15% annually unlike before. More business sense will it be if it retires the bonds- which takes up only 2% of its cash reserves. That applies too to some of its other bonds

It will be interesting to see what the eventual valuation of SFIG will be in the future. Will Mr. Market recognise the profitability and cash flow generation ability of its company? It is worth noting that our largest local bank, DBS, should be well aware of the profitability of this company. This is because the bank's China Division is a lender to SFIG as well as being involved in the abandoned IPO of Garden Fresh in Hong Kong.

It also boils to another question, given that SFIG is made known to #DBS, why is DBS vickers research not covering such an undervalued gem whose price earnings ratio, price book and cash flow generation ability is greatly unappreciated by the Singapore market.

This is something I am still pondering about.
Posted by Choon Yuan at 09:23 1 comment: