In the past few years, Singapore has seen a wide range of corporate failures of SGX Listed companies. Some of them include delisting after a large unexplained fall in prices, spectacular accounting impairments not seen since Enron, lack of material disclosures and corporate governance issues.

All these is leading to a dearth of IPOs and lack of investor sentiments which has seen the latest IPO only being 1.3x times subscribed. If it is difficult for investors to analysis the financials of a company due to poor accounting and lack of disclosures, they are likely to stay away. This is why regulators are present in every country to ensure rules are in place to ensure transparency and reduce the amount of frauds.

Unfortunately, it seems Singapore lacks the above.

Ayondo, the first fintech listed on SGX and probably holds the record for one of the fastest IPO to suspend itself. In March 2018, the company started trading after its IPO at $0.26 per share after approval from SGX and MAS. On the first day itself, the share price fell below its IPO price and went on a downward spiral never to recover again. In Jan 2019, the CEO then resigned after discontentment and disagreement between controlling shareholders, following which it was discovered Ayondo had accounting issues in its financials during the years leading up to its IPO. The company has since suspended itself from trading in Feb 2019- less than 1 year since it IPO'd. Ironically Ayondo is not a local company but has operations only in Europe. Why did SGX and not MAS first ponder over why the company chose Singapore as a listing place instead of European exchanges like London or Germany where its business operations were?

Then we have Sinograndness, a food and beverage company. The company is currently languishing at an extremely low price, where its valuation is at a price book value of 0.06 times and PE of 0.6. I am not kidding! However the company has many severe irregularities. Firstly the company did not announce it had defaulted on the loans it received from a Thai listed company. However the Thai Listed company had announced it on their stock exchange on 8 January 2019. Within the next few days, Sinograndness share price fell on the SGX, however the company made no announcements. It was only after 1 week plus did the company finally announce on this default; probably due to the numerous number of complaints sent to SGX by members of the public (including me) on the lack of material disclosure. What is more suspicious is that the company has growing receivables year on year despite a constant revenue and is always deploying its free cash flow back into PPE without much growth.

What Singapore needs are more Investigators and not Analysts

In the past few months, MAS has announced government funds has been set aside to subsidise the salaries of financial analysts and listing fees in order to boost the stock market. In my opinion, MAS is barking up the wrong tree.

The reason for the tepid stock market is because (i) companies with questionable business models are allowed to list, (ii) companies with corporate governance and (iii) accounting irregularities are largely unchecked during their time of listing on the SGX. Such companies are highly susceptible to frauds and doing massive impairments when the writing has been on the wall over the years, prior to its impairment.

Furthermore due to poor investor protection and enforcement by both SGX and MAS to the above points, this results in low quality listings in Singapore. The lack of quality listings outside the STI top 30 and known listed GLCs is causing poor valuation and liquidity. To summarise, what we need is a stronger enforcement regime in Singapore to shore up investor sentiments - MAS and SGX should be channelling funds to hire more investigators or allow its investigation unit to have more leeway to investigate companies with questionable accounting and business models that are currently listed here. This will improve investor sentiment and in turn the stock market.

The Conflict of Interest of SGX

This is an open conflict of interest. How can SGX regulate companies when they are also dependent on these companies for revenue via allowing them to list and trade on their stock exchange. SGX would want as many companies as possible to list so as to earn more listing fees.

In my opinion, Singapore should immediately separate the function of regulating listings away from SGX. A separate entity giving it to MAS or another authority should be done as in the examples of USA (SEC) or Japan (Securities and Exchange Surveillance Commission). It is bemusing that Singapore merges both regulatory and profit functions into SGX and hopes that the SGX could enforce companies and protect investors when it has to rely on companies for their revenue.

The continued lack of enforcement and subsequent lowered investor sentiment has been affecting the brokerage services of Singapore; as seen in the case of DBS vicker restructuring. Remisiers jobs are on the line as investors confidence falls.
Posted by Choon Yuan at 10:34 No comments:

I have been reading up on the recent annual reports and financial companies as this is the usual time of statement release. There has been some interesting observation. However one of the most pertinent is what I am seeing is in the oil & gas sector. Below are just purely my views on what may happen in Singapore's Local Oil & gas industry and readers should not just depend on it for investment decisions.

This is my first and most important observation. While we have seen our sovereign wealth fund (SWF), Temasek, putting money into local oil & gas company recently; from what I am seeing Temasek is not acting as a backstop to stabilise the industry but are actually trying to profit from it. One observation is from Marco Polo Marine. On February 2018, it was announced Pavilion, a Temasek Subsidiary, had bought a stake in Marco Polo Marine (MPM):

However when MPM released its latest annual report in 2019 , Pavilion fund appears in the top 20 with a diminished stake from 5+% to 0.93%. All this points to the thinking that our SWF is not going to act as a backstop to the ongoing oil & gas weakness in Singapore. They are in the market to profit and not stabilise the industry which is an economic backbone to our country. 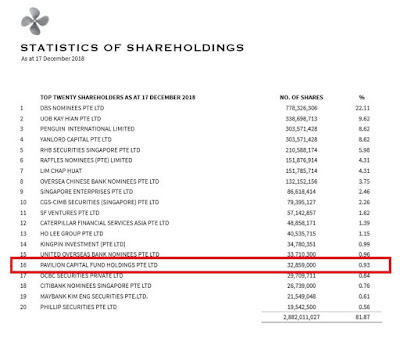 
I understand Pavilion too has bought a stake in Ezion which would have placed it in the top 20 with a 4.43% stake. I am willing to venture that in Ezion's latest annual report, Pavilion would have a much lower stake. Even accounting for the equity dilution etc, Pavilion stake in Ezion should not fall below 3%; however my sensing is that Pavilion has offloaded stake in Ezion to that of below 3% to profit on the situation

As seen from the many announcements made on the SGX, a few oil and gas companies are not receiving working capital funding from banks for their businesses. As AQ from valuebuddies has put it:

Over the past 3yrs, Sam Tsien (OCBC CEO) has been consistently saying that he does not see a "recovery for the OSVs unless oil >60 consistently. This is significant not because he is a great forecaster, but cos he is OCBC's CEO i.e. banks will not lend for oil<60. Brent bottomed out ~30 in 2016, spent 2017 in 50s, broke 60 in 2018 and hit 85 on 1Oct18. Analysts called for $200 oil. 2nd Oct - Jamal Kashoggi got murdered and oil fell back to 50s and is hovering ~60s now. For until Trump shuts up and OPEC acts led by Saudis, oil will find it hard to rally, and thus banks will not lend. Unless O&G players intend to fund capex, working capital etc solely out of equity, demand will not pickup. i.e. it all boils down to oil price.
I suspect the consortium of banks were willing to refi Ezion in 2017-2018 thinking oil bottomed and perhaps thinking state support, but now reluctant since oil collapsed and Temasek ended up being flippers."

Below is my own opinion. It is likely we are going to see more defaults among the SGX-listed companies. This will range from ASL marine asking for more haircut among bondholders to Falcon Energy probably undergoing another round of dilution. Indebted companies in the oil & gas will continue to flounder and more job will be lost.

It is true that oil prices has indeed recovered. But let's be honest, banks here are still not willing to lend. In 2008 our Sovereign wealth funds entered the financial markets and acted as back stopper, via buying and holding onto their stake. This sent a strong signal to the market the worst is over and banks started to lend again; however currently, the actions of our sovereign wealth funds being vultures attempting to profit, instead of a back stopper is likely to cause a credit event in the oil & gas industry. The worst is not over and we can expect more job losses in this industry. I too am bracing for more defaults and equity dilution in one of the largest industry in Singapore.