Since my previous portfolio update, I have made a few more purchases.

The first was the purchase of Broadway Industrial at 0.195. The thesis is pretty simple because I am hoping for a bumper dividend from completion of its "Foam Plastics and Flow Control" Segment. I am hoping its one off high dividend will attract investors attention and push its stock price up. Thta is where I will evaluate my position.

The Second purchase was World Precision Machinery at 0.22. Its business is in the metal stamping industry and is based in China. It is a subsidiary of Bright World Group, a chinese SOE. What attracted me was the strong constant Free cash flow generated from its operations. At an estimated free cash flow generation of RMB 80 mil annually, the company is being sold at a ratio of 6x P/FCF, to me its rather cheap and i have initiated a position.

To allay the fear of fake cash, the company has been declaring dividends to shareholders annually.

The last purchase is a familiar name to me- First Ship Lease Trust. It was only purchased last Thursday at a price of 0.133. To me, despite the company's announcement that it will be doing an impairment exercise which resulted in a full year loss; it's strong cash flow generation ability is a draw.

The trust produced about US$70mil cash from operation before working capital changes in the most recent financial year. Moving forward, given the declining tanker rates and that many of the leases of its tankers are up for renewal this year, it will prudent to assume the company is only able to generate about 70% of that (US$42mil). Assume dry docking expenses of US $2mil and interest expense of US$8mil, FSL should be able to generate free cash flow of US$32 mil. This translates to about 1.6x P/FCF.

However the above ratio should not be a key consideration. This is because FSL operates assets which has a limited lifespan. Its ship fleet currently has a weighted average of 10 years. This means probably another 16 more years before they are scrapped.

Unlike Rickemers who is having trouble repaying its debts, FSL cash flow shows it has the ability to repay its entire debt in 5 years. My opinion is that FSL is unlikely to pay dividends for the next 5 years to pay down its loans, after which it is anybody's guess. Hopefully then, its cash flow remains strong and should it decide to pay just half of its free cash flow generated, I will be getting an approximate 30% dividend yield at current price.

Owning a Car in Singapore can make sense

Fellow Blogger, Bullythebear, covered an interesting concept he read from 'Tools of Titans" by Timothy Ferris. It talks about weighing the utility of the extra time gained from spending an extra dollar to get it.

This concept reminds me of constant conversations about how a car is a tool of convenience through saving time. So, I will be using a mathematical approach to show when owning a car in Singapore may make sense.

Cost of Owning and Maintaining a car

Firstly, lets find out the approximate expense of owning a car for 10 years. I used the price of a Toyota 1.6L as a gauge. Its current price is about $102,000. Next I estimated a down payment of 50% with the rest being financed by a car loan at 3% interest for a 5 years tenure. I also provided an estimate of the annual road tax, fuel expense and car insurance in the table below. As this is an annual expense which happens every year for the next 10 years, I applied a discount rate of 4% to get the present value (P.V.). Lastly, I estimated receiving a scrap value of $6,000 at the end of the 10 years and discounted it to present vale (P.V.) The below Excel shows the estimated present value of owning and maintaining the car over 10 years. This will be the amount we are spending to gain the extra time. 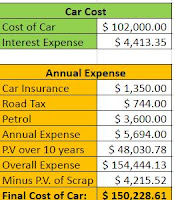 Ask anyone on the street how much would they pay for an extra hour and a variety of answers will be obtained. Hence to avoid doing a sample survey, I will base it on "hourly wage" concept by dividing the monthly salary by 168 man hours worked in a single month. Hence, if someone earns $4,200 monthly (excluding Employer CPF Contributions), his perceived utility of earning an extra hour is $25 per hour ($4,200 divided by 168).

Next, I ask how much time is saved by commuting on a car than public transport. From my guess estimate of commuting to the city for work, I realize it is fair to say one saves about 30 minutes on a one way trip; so two ways will be 1 hour saved. And on Saturdays and Sundays, people will definitely use the car for easier commute. So in a year of 365 days, one person will have gained an "extra" 365 hours.

So in the current year, a person saving 365 hours and basing on a monetary value of $25 per hour, the person gains S$9,125 for the first year. As one will realize, the utility gained is over a 10 year time frame, therefore I will have to calculate the present value of this utility earned over 10 years.

I did some permutations and made two observations.

If one is earning at least an estimated $50 per hour wage or $8,400 monthly, owning a car in Singapore alone is justified because the utility from the time gained is about the same as your overall expenditure on the car (owning & maintaining), see Figure 4.

Of course, many of us do not earn $50 per hour (including yours truly!) However, if you are married or have a sibling who is working, mathematics will prove that earning $25 per hour justifies the reason to own a car in Singapore. 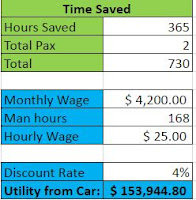 This simple Excel model has informed how the efficiency of the public transport system affects the ownership of a car to a large extent. In fact, with many Singaporean graduates already entering the workforce with an at least $3,000 monthly paycheck; it is likely a married couple's combined income level would have exceeded the $8,400 threshold having worked for a while- a tad worrying.

From this angle, it seems our transport and urban planners will have to accomplish much to reduce the travelling time by either increasing the connectivity of the public transport system or decentralizing commercial spaces.

The diabolical alternative is to reduce the wages of the people; to make them feel time is not that valuable 😈