Just a quick update to my portfolio because there has been a flurry of activities.

Sold all Hyflux Preference Shares in my CDP to realize an approximate 10% gain. I managed to "pick some pennies" on this company debt instrument and have decided to allocate my capital to the below 2:

The thesis for Memtech was pretty simple. It is in the same industry as Fischer Tech and Sunningdale. With its strong cash position and cash flow generation ability, the price which i purchased at 0.705 seemed a good steal. Furthermore Memtech was trading at a 0.7x P/B ratio while Sunningdale and Fischer were being sold close to book value. In addition, Memtech Intl is a turn around stock with its profitability improving year on year. So given the industry it is in and how much its peers were being valued by Mr. Market, I have set a target of about 0.90 on the premise of revaluing it close to its peer values.

The reverse can be said about FSL. Its prices has been declining and I used the opportunity to accumulate more at 0.124, 0.116 and very recently 0.103. In my view, the worries of the company''s inability to refinance and becoming a "rickmers" has caused Mr. Market to downgrade it "exuberantly". I will write a review on FSL at later date, (probably after its AGM and release of Q1 FY 17 results).
Posted by Choon Yuan at 13:52 No comments:

Your HDB Flat is a Depreciating Asset (eventually)

Recently, the stark reality about the value of our HDB flats was reiterated by our current MND minister, Mr. Lawrence Wong - where upon expiry of its lease, your flat will be returned at zero value to the State via HDB. The Straits Times too has been unforgiving with its relentless churning of articles on the topic of "Lease Expiry" with its latest article on private estates nearing the end of its lease and residents distraught.

A few investment bloggers and investing forum had been harping on the fact that many properties in Singapore are leasehold by nature; which means the property value eventually depreciates to zero upon expiry of its lease (be it 20, 30, 99 years etc) and returned to the State,

A feature of Singapore's leasehold is that the value of the property does not depreciate in a straight line but that similar to a concave nature. The Singapore Land Authority (SLA) has a leasehold table which shows how much value of your property is retained as the number of years on its lease runs down. Fellow blogger, Investmentmoats, has depicted this on a table and a graph showing the speed of depreciation which I have reproduced below with his permission. 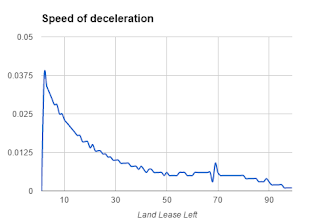 
Applying SLA's leasehold rates to the value of a HDB flat with the number of years on the lease left; from the table and graph, one will notice the speed of depreciation is most pronounced when a flat's remaining lease tenure falls below 30 years. At that stage, your flat retains about 60% of its value as compared to freehold value; moving to 20 years remaining, it only retains 48.0%, and with 10 years remaining - 30.0%. That sets out to a 1-3% annual loss!

On the contrary, during the first 69 years of a HDB flat's lifespan; you only lose approximately 36-40% of its value. Therefore between these 69 years, about 0.2% to 0.6% of property value is lost annually (before inflation and other demand factors). The slower depreciation at the beginning probably why HDB flat prices are still intact despite using 10 - 30 years of its lease.

Hence fortunately (or unfortunately), because very few HDB flats has reached the stage where there is only 30 years of its lease remaining (only 7% of HDB flats are above 40 years old); valuations of HDB flats have remained sky high. This is because the annual 0.2% to 0.6% depreciation had been offset by factors such as i) Inflation and ii) Property demand due to a growing population. It will take about 40-50 years to see the effects of depreciation on HDB flats.

Critics may argue that the value of HDB flat at the tail end of its 30 years lease can be maintained by ensuring that inflation and property demand remains stubbornly high to offset the approximate 2-3% annual decrease. However, in my opinion, such a scenario will mean either ensuring no houses are built to meet the demands of a rapid population growth (most likely achieved by importing a lot of foreigners) or that Singapore experiences a period of high inflation - not ideal to the citizens' cost of living.

Nevertheless, even if such scenarios do materialize; at the end of the 99th year, a HDB flat is still returned at zero value back to HDB and then to the State.

Wait, there is a Solution!

Others may point out that topping up your lease back to 99 years will do the trick. Some example has been like how Singholdings did an enbloc at Robin Road and paid cash to top up the remaining lease for a fresh 99 year status.

While this indeed can be done, it is highly unlikely HDB will do so for all of its land.This is because land use intensification or urban renewal has to be done to allow for the justification of a lease top up. In addition, it requires approval from the lessee. Property developers are able to do such lease topping up quickly and efficiently because they are the sole lessee of the land after completion of the enbloc.

And the Icing on the Cake

While I have been going on about how a HDB flat's value is affected by depreciation of its lease, another factor deserves a worthy mention - the low fertility rate (1.2 as of 2016). Without enough babies to replace Singapore Citizens and PRs in the future, it will mean a fall in demand for HDB flats; indicating less opportunity for HDB dwellers to upgrade or even monetize their flat's value when they purchase a second home.

It has been almost 2 months since my last portfolio transaction updates. So here goes:

The "No dividend" announcement was bit of a shocker to me. My main thesis to invest in World Precision was due to its consistent declaration of dividends. Therefore, i took a chance to divest it when someone was offering to buy it at 0.235 after the full year results. This allowed me to clock in a 7% return.

This was another company hit by negative news via comments made by its auditors. However, when I re-invested into FSL trust; I was already aware of the fact that its bank loan will be classified to "Current Liabilities" because it is due in Dec 17, resulting in current liabilities exceeding current assets. So when Moore Stephens LLP, its auditor, highlighted of its going concerns due to the high current liabilities; I wasn't surprised. To me, given the company's prompt repayment, and that its 22 ships will serve as collateral and has sufficient market value in the tanker markets, I am quite confident a new bank loan will be granted (rolled over)

Capitalizing on the fall in prices due to its auditor's comments, I took the opportunity to add to my initial stake at 0.131.

I also bought 11,000 shares of Silverlake at 0.575 because I still find it undervalued due to its actions of monetizing its china associate's stake and stable core banking system segment.

Sold all of my Broadway Industrial holdings as the run up in its price meant an opportunity to deploy cash for other purposes.

Sold some of my Hyflux Preference Shares and used the proceeds to purchase FSL. This is due to my belief that FSL trust should achieve a return of at least 10% vis-a-vis Hyflux's estimated returns of 8.5% in the next 1 year and 2 months basis.